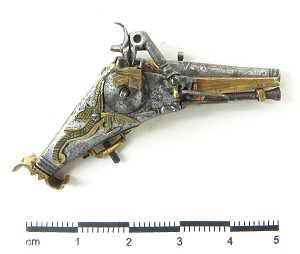 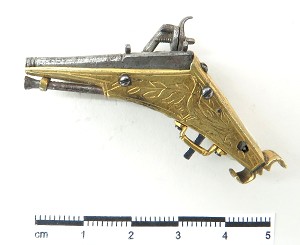 The four fishtail-stock wheellock pistols differ from one another only in a few minor details. Although crafted in miniature format, they are fully functional from a purely technical point of view.

The wheel covers are rounded and the barrels are cylindrical along the front half (muzzle end) and flat-sided along the back half (breech end). The miniature pistols can be worn as a pendant by attaching a chain to the small, integrated eyelets.

All four specimens are characterised by the contrasting colours of the iron components and the gilt ornamental elements. The fishtail stocks, priming pans and pan covers are made of gilt and 70 engraved copper. The stock and grip are each covered by a screwed-on, gilt copper plate. The plates, wheellock mechanisms and stocks are engraved with various tendril motifs, filigree lozenges and herringbone patterns, or, in one case, a leaping animal. The likewise gilt trigger guards are either rectangular or curved and the triggers are straight. Ramrod, dog and dog spring are generally plain. The most highly decorative pistol is L 841.

In view of their style and technical design, the four miniature wheellock pistols are attributed to the Nuremberg-based ornamental metalworker, locksmith and gunsmith Michael Mann, who achieved widespread fame in the late 16th and early 17th century primarily for his mechanically complex and nevertheless skilfully crafted miniature iron boxes. Along with boxes, Michael Mann also fabricated miniature weapons and model cannons. These miniature works of art often ended up as prized collectibles in cabinets of curiosities, which sprang up across Europe in the Late Renaissance and Baroque periods.

Unlike mere art collections, these cabinets of curiosities embraced the concept of universal collecting as well as a fascination with rarities, curiosities and exotica. At the same time, the precious and valuable collections served as a status symbol and a sign of the humanistic attitude of their aristocratic or bourgeois owners. Typical collectibles included artistically crafted gold and silversmith works such as nautilus cups, prepared ostrich eggs and narwhal tusks, exquisitely carved ivory and wood turning pieces, ornate clocks, gambling machines, celestial globes, East Asian porcelain and indeed miniature artistic masterpieces such as coffers, pistols or intricately carved cherry pits.

Michael Mann’s date of birth and death are unknown. He was born in Augsburg and died near Wöhrd outside Nuremberg sometime after 1630. Mann completed his training in Nuremberg and was certified as a master craftsman in Augsburg. Later he lived and worked in Fürth and in Wöhrd.

In his famous work “Historical record of Nuremberg’s mathematicians and artists” published in 1730, the astronomer Johann Gabriel Doppelmayr of Nuremberg (27 September 1677–1 December 1750) wrote this of Michael Mann: “An art metalworker with a 71 particular passion for manufacturing small iron boxes that he furnished with subtle locks, neatly etched and gilt, then also tiny guns and pistols of iron, etched and gilt, too, which are still valued today as beautiful works of art.”