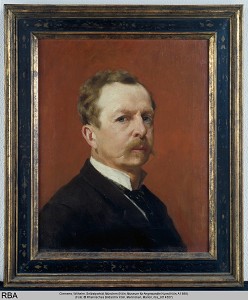 On 30th January, 1962, Dr. Erich Köllmann (1906–1986), the former director of the Cologne Kunstgewerbemuseum, wrote to the superior authority for museum affairs: “On the occasion of a visit to Mr. Robert Wallraf […], I was presented with a self-portrait by Wilhelm Clemens, who donated his significant collection to the Kunstgewerbemuseum in 1921. Mr. Robert Wallraf, a nephew of the painter Wilhelm Clemens, donates […] this painting in memory of his uncle.” Furthermore, Köllmann requested that Mr. Wallraf be sent an official letter of thanks.

This self-portrait is composed as a head-and-shoulders portrait in three-quarter profile turned to the right and set against a slightly cloudy, orange-brown background. The entire figure is positioned slightly to the left of the pictorial space, resulting in a somewhat larger colour surface on the right. This type of profile with empty space on the right-hand side of the picture is a frequently used, classic stylistic medium in portrait painting. The three-quarter profile allows the painter to accentuate distinctive details of the face, such as the form of the lower jaw or of the chin, while not neglecting the symmetry of the face. The empty space on the right serves to focus the viewer’s gaze: the natural reading direction of a viewer of western influence is from top left to bottom right. Hence, the eye finds a lot of information on the left, while the right-hand side remains empty. If the empty space were on the left, i.e. if the portrait were moved towards the right side of the image, this would serve to increase the tension.

Clemens is wearing a dark jacket, presumably with a waistcoat, and a white, stand-up collar shirt with pointed collar corners. A patterned cravat is slung loosely around the collar. His blond, slightly curly hair is cut short; he sports a blond moustache and chin beard. His blue, deep-set eyes look directly and solemnly at the viewer (or at his own reflection in the mirror). There is a 16 distinctive wide scar on his cheek, which runs from his moustache down to the jawbone.

When Clemens moved to Heidelberg in the 1860s to study law, he became a member of the Corps Guestphalia Heidelberg fraternity where fencing was obligatory. In the Mensur, the traditional and strongly regimented fencing fights, he received two scars: the one described above and another one, running horizontally from the nostril to the centre of the cheek, on the other side of his face which is turned away from the viewer.

In order to be able to determine Clemens’s age at the time, it is helpful to first compare contemporary descriptions with this portrait. In the documents of his descendants, handwritten notes by a Baroness Marie Brunner from Vienna have been preserved, who met Clemens in 1879 in Munich. Among other things, she describes him as “very tall and quite slim, blondhaired, with blue eyes and even features.” The Munich-based painter colleague Paul Eduard Crodel (1862-1928), however, described his appearance in the post-1918 period as “a gentleman of average height with greying hair”. The information on his height must certainly be considered in relation to the authors, but the description of his hair colour is important.

Another self-portrait was preserved in the family estate. It is signed and dated 1927. Here, Clemens presents himself in a pose, posture and dress, which are almost identical to the portrait in the MAKK. Unlike the MAKK portrait, however, the colour scheme is dominated by beige and ochre shades. Clemens’s face shows clear signs of age, the hairline has receded from the forehead, his hair and beard have turned grey. The brushstroke seems more fluid and somewhat compacted. The image from the museum’s collection must therefore originate from a much earlier time. Many of Clemens’s works have fortunately been preserved as originals or as prints. The Clemens file includes a card showing a signed painting from 1889: ‘Young Man with Hat, Sitting on a Chair’. Composition and brushstroke are much more similar to this self-portrait than to the portrait of Clemens in old age. If one also considers the statement of the Viennese baroness, who mentions blond hair, it seems likely that the portrait shown here was created before 1900 at least. Wilhelm Clemens would then have painted himself at the age of about 40 to 50 maximum.