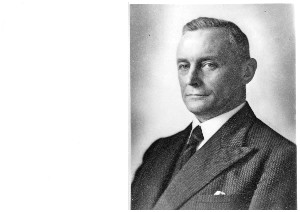 Director General of the Arts and Crafts Collections

On 1st February 1938, Adolf Feulner (1884-1945) took up office as director general of the arts and crafts collections in Cologne. With Feulner, the city appointed an experienced art historian with a high academic reputation and excellent connections to museums, the art trade and collectors. In his new position, he would be in charge of the Museum of Arts and Crafts, the Museum of East Asian Art and the Schnütgen Museum.

Feulner came from a family of teachers in Schwabhausen near Dachau. After completing his studies in Munich, he began his professional career in the Bavarian Department for the Preservation of Monuments, becoming curator at the recently founded Residenzmuseum in Munich in 1919. Having risen to the position of chief conservator, in 1930, he applied for a position in Frankfurt am Main, where he became director of the city's Historical Museum and the Museum of Arts and Crafts. In his academic work, he specialised in Baroque art and wrote fundamental publications on the history of furniture (1927), on Frankfurt faience (1935) and on the history of German sculpture (published posthumously in 1953).

The Department of Culture of the city of Cologne had initially planned to appoint Adolf Feulner as director of the Schnütgen Museum. However, Feulner did not want to give up his position as director of two museums in Frankfurt. Consequently, the mayor of Cologne, Karl Georg Schmidt (1904-1940), offered him the post of director general of the arts and crafts collections in Cologne. This position was especially created for Feulner, and the time seemed favourable: Since the death of the first director of the Schnütgen Museum, Fritz Witte, in March 1937, his post had remained vacant. The directorship of the Museum of East Asian Art was also vacant after the donor Frieda Fischer (1874-1945), who had presided over the collection since 1914, was expelled from her post in 1937 because she was married in second marriage to the Jewish lawyer Alfred Ludwig Wieruszowski. At the time of Feulner's appointment, only the Cologne Museum of Arts and Crafts had a director, the Berlin-born art historian Rudolf Verres (1898-1945). At both the Schnütgen Museum and the Museum of East Asian Art, internal duties lay in the hands of their research staff, Hermann Schnitzler (1905-1976) and Werner Speiser (1908-1965). As director general, Adolf Feulner was responsible for the overall management of these collections and the museum staff.

Feulner's duties in Cologne were not limited to the management of the arts and crafts collections. On the contrary, the city expected new ideas for a reorganisation of the Cologne museums from the experienced museum man, who had joined the NSDAP when he took up his post in Cologne. Since the end of the First World War, there had been repeated efforts to reorganise the city's collections, their structure and areas of responsibility. In 1925, Lord Mayor Konrad Adenauer founded the Rheinische Museum, the realisation of which took until the 1930s. The official opening did not take place until 1936, following several conceptual adjustments and a renaming to Haus der Rheinischen Heimat. The other museums in Cologne were obliged to relinquish parts of their collections to the Rheinische Museum, with the Museum of Arts and Crafts being particularly affected along with the Historical Museum. With the relocation of the Schnütgen Collection, which until then had been a part of the Museum of Arts and Crafts, the museum had also lost almost all of its medieval inventory: When it was founded, the Schnütgen Museum also gained the existing medieval inventory of the Museum of Arts and Crafts.

Lord Mayor Schmidt wanted Feulner to present a new concept for the upgrading and restructuring of Cologne's museum landscape. The new director general took on this task right at the beginning of his term of office and presented his plan on the occasion of his inaugural speech on 7 March 1938 at the Cologne City Hall. The key points outlined therein foresaw the complete integration of the Historical Museum into the Haus der Rheinischen Heimat and a new building for the Wallraf-Richartz-Museum, from which the extensive Roman-Germanic Department was to be detached and established as an independent museum. In the long term, Feulner wanted to reunite the Museum of Arts and Crafts with the Schnütgen Museum, to form a new museum for decorative arts and sculpture, which he envisioned in the vicinity of the cathedral and the Diocesan Museum.

In Cologne, Adolf Feulner also devised a concept for a general directorate for the city's museums. The newly created body consisted of the incumbent head of cultural affairs, Dr. Ludwig, as chairman, Adolf Feulner with the title of director general as Ludwig's deputy, and two other museum directors. The General Directorate met at intervals of about two months to discuss issues such as planned exhibitions, personnel and, above all, the museums’ new acquisitions. It began its work in the summer of 1938 and existed in this form until the first years of the war. Adolf Feulner was not able to pursue the central project of reorganising Cologne's museums for long. One and a half years after taking office, in view of the impending war, he, like the other museum employees in Cologne, had to organise the evacuation of the collections entrusted to him.

The Museum of Arts and Crafts under Adolf Feulner

When Feulner took over as director of the Museum of Arts and Crafts, the museum, founded in 1888, was celebrating its 50th anniversary. Presumably, planning for the jubilee exhibition Cologne Faience Collectors Exhibit, which would be shown in the summer, was already in full swing. Feulner thus left the implementation of this project in the hands of director Rudolf Verres. Since Verres had redesigned the museum's permanent exhibition in previous years, no changes were made that reflected Feulner's ideas regarding the presentation of the arts and crafts collection. It is not clear to what extent he was involved in the conception of special exhibitions, such as a furniture exhibition planned for 1940. Due to the war, no big exhibitions were shown after 1938. Feulner's influence on the Museum of Arts and Crafts became particularly visible with regard to the acquisitions made in the subsequent years. Before Feulner took office, Rudolf Verres had been responsible for acquisitions since 1934. Under Verres' jurisdiction, acquisitions from the supra-regional art trade were made mainly in Berlin, which was due to the fact that, having worked for the state museums in Berlin before 1934, he had upkept good contacts to the Berlin art market and, by virtue of family connections, also to Rudolph Lepke's Kunst-Auctions-Haus. Verres bought at auctions in Berlin from Lepke and Paul Graupe as well as from dealers such as Gustav Cramer, Ferdinand Knapp, Hans Linz and Kahlert & Sohn. Under Feulner, trade relations were also expanded to southern Germany. Shortly after taking up his post in Cologne, Feulner entered into negotiations with the Munich art dealer Julius Böhler, from whom the Museum of Arts and Crafts acquired several objects in 1938 and 1939, particularly furniture. Feulner also negotiated several purchases with Böhler for the Schnütgen Museum. His contacts with the company, which, in the first half of the 20th century, was one of the largest art dealers in the German-speaking world, probably dated back to Feulner's time at the Munich Residenzmuseum. Among the Munich art dealers from whom the Museum of Arts and Crafts bought pieces during these years were Wilhelm Böhler, Konrad Riggauer and Eugen Brüschwiler. The Cologne art trade also remained an important source of acquisitions for the museum; it bought objects from Hermann Sonnthal, Albert Loevenich, Elfriede Langeloh, Josef Robert Becker, Viktor Exinger, Alois Faust and from Kunsthaus Lempertz, among others.

Feulner's connections were also decisive in the complicated exchange deal regarding the painting Mary and Child by Lucas Cranach the Elder, which the city of Cologne gave to Hermann Göring (1893-1946) as a christening present for his daughter. He also involved the art dealer Theodor Fischer from Lucerne, from whom the Museum of Arts and Crafts eventually received a precious lidded cup [link to article] as a gift.

Feulner also knew his way around in collectors' circles. In the summer of 1938, Feulner, a connoisseur of faience, set out for Nuremberg to examine the collection of the Jewish entrepreneur Igo Levi (1887 - 1961). He assumed that this high-quality private collection would soon come on the market, and he was to be proved right with this assessment. The surviving files on his general management prove that Feulner devoted himself to his new task in Cologne with alacrity. This included considering the art holdings of Jewish collectors and art dealers, which had been flooding the art market since 1938 due to Nazi persecution, as an opportunity to expand and enhance the Cologne museum collections. Existing documents show that Feulner had no reservations about acquiring cultural assets that had been expropriated and sold under pressure at the ‘favourable conditions’, which were offered to the museums in the Reich due to the increasing pressure of persecution upon the rightful owners.

Only few sources regarding Feulner have survived the war years. In October 1939, he was appointed honorary professor at the Institute of Art History of the University of Cologne, where he worked until 1944. He was responsible for supervising the art collections that had been moved elsewhere. There are also indications that Feulner took on assignments as an art expert, as an assessor for the purchase of cultural property in the administrative district of Cologne and, as was the case in the First World War, in the field of art protection.

In June 1943, the building of the Museum of Arts and Crafts was severely damaged during bombing attacks on Cologne. After his home was also destroyed, Adolf Feulner and his family left the city like thousands of other Cologne residents. Following interim stops in Bad Godesberg and Würzburg, in the winter of 1944, he found accommodation in Wiesentheid Castle in Unterfranken. At that time, other people from the Cologne art and museum scene were also living in the castle of the Count von Schönborn family. After the end of the war, Feulner tried to regain his position as director general in Cologne. In May 1945, his civil servant status had been automatically terminated. For the time being, his membership in the NSDAP made it impossible for him to return to municipal service under the British military government. This news probably contributed to Adolf Feulner taking his own life during a depressive phase in August 1945. Since 1932 at the latest, Feulner had been suffering from a recurring state of depression, for which he had repeatedly been treated as an in-patient for longer periods of time. After an investigation by the responsible authorities of the military government, which also examined his political views and and took an exculpatory standpoint into consideration, Feulner was posthumously classified as unobjectionable. His widow and his children, who were still minors, received full pension payments from the city of Cologne.

As part of the provenance research at the MAKK, intensive research is currently being carried out on the person of Adolf Feulner and his role as Cologne director general. From 1938 to 1945, Feulner was involved in cross-museum issues of cultural administration and in particular in the acquisition of cultural property for the museums of Cologne and for the municipality. Due to his extensive contacts with museums and the art market, he is also a significant protagonist for supra-regional research.