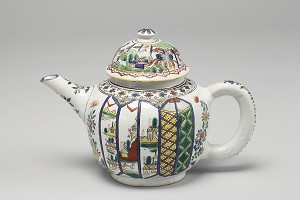 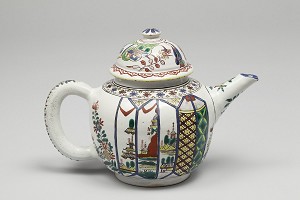 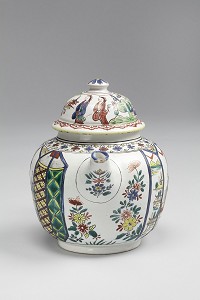 Teapot with Chinoiserie from the Igo Levi Collection

This teapot with East Asian-inspired pattern was made in the first half of the 18th century in the faience manufactory of Ansbach in Middle Franconia. The pattern, which depicts two five-part screens on the surface of the teapot, was painted by Johann Georg Christoph Popp (1697-1784), who left behind a comprehensive oeuvre as a faience painter. With its characteristic colouring, the pot for the most popular hot beverage of the 18th century, belongs to the "Green Family" of the Ansbach production. The teapot belongs to the MAKK’s significant collection of faience from German manufactories. The museum's collection includes about 180 of these tin-glazed ceramics, which enjoyed great popularity in Europe in the 17th and 18th centuries.1 Often magnificently painted, faience – the name derives from the Italian ceramics centre of Faenza – was a sought-after material for tableware, toiletries and decorative objects among the upper classes.

In 1938, the teapot was included in the collection of the Museum of Applied Arts, then called Kunstgewerbemuseum (Museum of Arts and Crafts). At that time, faience was one of the museum's preferred areas of collection. For the museum the year 1938 was particularly characterised by these ceramics. In that year, the museum, founded in 1888, celebrated its 50th anniversary. For the extensive anniversary exhibition, which was shown during the summer months, director Dr. Rudolf Verres had invited several private collectors from Cologne to present their faience collections in the museum's premises – a collaboration from which both sides certainly benefited. The museum was able to delight its visitors with well over 200 loaned exhibits that were otherwise not accessible to the public.2 For the collectors, the honour of a museum exhibition was also an official assurance of the quality of their collections.

In February 1938, Dr. Adolf Feulner (1884-1945) had taken up the post of director general of the arts and crafts collections of the City of Cologne and had been responsible for the Museum of Arts and Crafts since then. With Feulner, Cologne had also acquired another expert on faience. During his time as museum director in Frankfurt, the art historian had presented a survey on Frankfurt faience work, and he was well connected with collectors and dealers in this field. We do not know whether he was involved in the planning of the anniversary exhibition in Cologne, which was certainly already underway. However, the show was most likely in keeping with his spirit and facilitated the rapid expansion of his contacts with private collectors in Cologne.

From the 1920s onwards, Igo Levi, an entrepreneur in the metal industry, had amassed an extensive collection of German faience, which was soon considered one of the highest quality collections in this field. When the National Socialists seized power in 1933, Igo Levi was persecuted because of his Jewish origins. Negotiations with the Museum of Arts and Crafts regarding a purchase from his collection took place at a time when the situation of the Jewish population under the persecution of the Nazi regime was escalating once more. Like all Jewish citizens, in the summer of 1938, Igo Levi had to declare his assets to the authorities, including his art collection. Fair deals were hardly to be expected for Jewish sellers at this stage. In September 1938, the Museum of Arts and Crafts finally selected the Ansbach teapot and 21 other faience pieces for purchase from Igo Levi. It has not yet been possible to clarify exactly how this transaction took place, and investigations into the matter are still ongoing. In addition to private collectors, the Cologne art dealer Hermann Sonnthal was probably also involved.

On the night of the 9th to the 10th November 1938, members of the NSDAP organisation Deutsche Arbeitsfront (DAF; German Labour Front) raided Igo Levi’s home in Nuremberg.4 Like thousands of other victims of the pogrom organised by the Nazi regime against persons and institutions of Jewish culture in Germany, he was interned in a concentration camp for several weeks. After his release, he had to cede the right of use and disposal over all his possessions, including his art collection. The faience collection had been confiscated by the DAF in the meantime and was to be sold. Levi had neither a say in the sales negotiations nor could he freely dispose of the money generated. Of the 465 faience pieces looted in this way and distributed over various public and private collections, Levi received only about 115 objects back after the war; the rest remained lost. Three faience pieces from this collection also found their way to the Cologne Museum of Arts and Crafts through various channels ­– they were restored to the collector in 1951.

After the restitution of the three confiscated faience pieces, Levi also demanded the return of the pieces from his collection acquired in September 1938. The Museum of Arts and Crafts was unable to provide the necessary proof that the sale had been made by Levi of his own free will. However, the collector had previously waived the return of the faience in ignorance of his rights. Lengthy negotiations followed. As can be seen from the surviving correspondence with the museum, Igo Levi was primarily interested in a mutually agreeable and amicable solution. Under no circumstances did he want a legal dispute. The collector finally agreed with the Museum of Arts and Crafts on a generous settlement in favour of the museum: three faience pieces from the collection purchased in September 1938 were returned to Igo Levi, in return for which he waived further claims against the City of Cologne. In this way, the teapot and 18 other pieces with the provenance "Igo Levi Collection" rightfully entered the MAKK's collections.