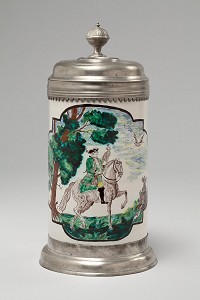 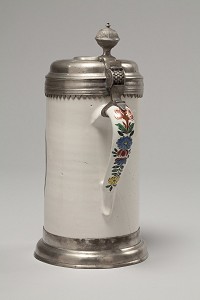 Tankard with Depiction of Heron Hawking

The slightly conical vessel is mounted on a high, profiled base ring with a solid base and features a profiled lip border with a serrated frieze – both made of pewter – to protect the fragile material. The domed hinged lid, which is flattened at the top, has a spherical lid lever with a pipe ornament. The lid is attached to the vessel with a cuffed handle that has a slightly concave band. A cast medallion depicting a lady with her lover, who is pushing her old husband aside, is inset into the centre of the lid. The circumferential inscription reads: ICH WÆRME BALD, DER ALT IST KALD (I will soon be warm / the old man is cold).

The front of the tankard is decorated with the depiction of a falconer riding towards the right, framed by a quatrefoil ornament. On the left, there is a large deciduous tree; on the right in the background, there is a village with a windmill and a smoking chimney. A wanderer is striding down the path leading towards the village and a heron is flying in the sky towards the right. The back of the handle tapers towards the base and is painted with polychrome flower and leaf tendrils.

Heron hawking was one of the highest forms of falconry and was the sole reserve of the aristocracy. It took place in May or June when the herons returned from their winter habitats. This type of hunt, which was not without danger for the falcon, offered the hunting party the exciting spectacle of the birds fighting in flight. The aim was not to kill the heron, but to force it to the ground. The plucked out head feathers served as trophies and the bird was also ringed with the name of the falconer. It sometimes happened that a heron was hunted several times and wore multiple rings, whereby the names of the successful falconers could recur – to the delight of the gathered hunting party. One of the most significant fans of heron hawking was Charles William Frederick, Margrave of Brandenburg-Ansbach (1712–1757), nicknamed the ‘Wild Margrave’, who hunted a 33 34 total of 37,238 birds from 1730 to 1757. We owe a number of Ansbach faience pieces embellished with scenes of his favourite pastime of heron hawking to this passion of the Ansbach margrave.

The founder of the Ansbach faience manufactory was William Frederick, Margrave of Brandenburg-Ansbach (1686–1723). His efforts to create a modern and representative residence according to the contemporary taste was significantly supported by his wife, Christiane Charlotte of Württemberg-Winnental (1694–1729), daughter of Frederick Charles, Duke of Württemberg-Winnental (1652–1698). The margravine enjoyed an excellent education of French influence; she was talented and appreciated the arts. Luxury tableware was an integral part of the splendour at the court of a duke, both for the decoration of the state rooms and for the margrave’s dinner table. The founding and operation of a private faience manufactory not only conformed to the principles of mercantilism, but, first and foremost, served to fulfill the court’s requirements in tableware and in luxury show pieces and decorative items.

The manufactory was built uphill from the royal seat, by the millstream, in the municipal fulling mill, formerly the margrave’s powder mill. For this purpose, the plant had to be re-purchased by the margraves. The redevelopment work started in September 1709 with the manufactory commencing operations as early as 1710. From 1712 onwards, it was already producing faience pieces of high quality in sufficient numbers. The monopoly to protect the factory and its products was enacted by the margrave on April 4th, 1712. As decorative and household faience work had become indispensable in the newly constructed magnificent castle of the Margrave of Ansbach and in the stately homes of the nobility, the faience factory received many profitable commissions. Despite direct competition from Oettingen-Schrattenhofen and Crailsheim, the factory continued to prosper during the reign of the ‘Wild Margrave’, who succeeded his mother after her death in 1729. The first serious competitor was the porcelain manufactory in Ansbach, established by the following Margrave Christian Frederick Carl Alexander (1736-1806). However, the faience production was still able to prevail because its portfolio was increasingly adapted to meet the needs of the bourgeoisie and of gentleman farmers. The company was in operation until 1804. In 1807 it was eventually forced to close and sold at auction.