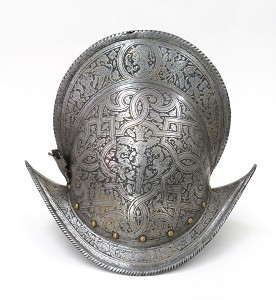 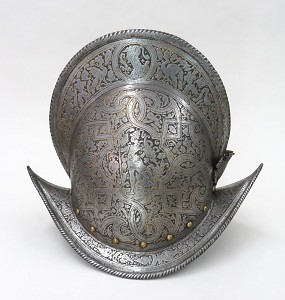 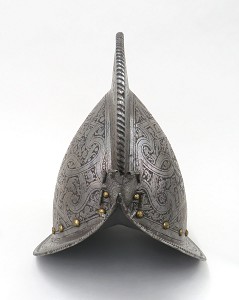 This morion is characterised by a high, curved crest and a crescent-shaped brim, both of which are framed by a grooved edge. At the front, the lower end of the crest is decorated with a cartouche containing a tube to hold the plumage. The surface of the helmet bowl is decorated with a symmetrical design of bands, each of which develops around a central motif: on the right, there is a representation of a striding Mars in full armour, carrying a shield and a spear. On the left, one can see a winged Hermes flanked by dragons. In the spandrels, there are illustrations of mythological creatures, armour parts and weapons. Both sides of the crest feature a profile of Mars, god of war, inscribed in a round medallion, which is also flanked by mythological creatures and armour parts. The brim is decorated with stylised tendrils. The helmet is worked from one piece of metal and is extremely thin, which has a positive effect on the weight, and thereby, on the wearing comfort. The lower, curved end of the helmet bowl is accentuated with a circumferential row of gilded rivets.

In the 16th century, the changing requirements of cavalry and infantry gave rise to new forms of helmets. These also included the morion, which originated from the Spanish iron helmet and became prevalent all over Europe. This open type of helmet 63 without a visor was worn by the soldiers of the light cavalry and infantry or by lifeguards, municipal and palace guards. The examples that served representative purposes were often elaborately decorated. Characteristic features are decors of renaissance ornaments, war attributes and figurative representations in etching technique.

The morion is still part of the traditional gala uniform of the Vatican’s Swiss Guard, which, since its foundation in 1506 as the lifeguards and palace guards of the Pope, has not changed in appearance.