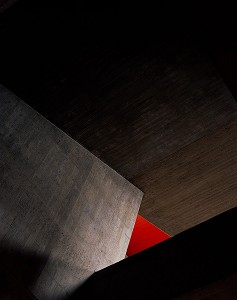 To mark Gottfried Böhm’s 100th birthday, the Cologne Museum of Applied Arts (MAKK) has invited the internationally renowned photographer Hélène Binet to ‘portray’ a selection of early ecclesiastical buildings by the Cologne-based architect. Through a composition of light, shade and texture, Binet highlights the characteristic qualities of the buildings while simultaneously providing the viewer with new visual perspectives.Her works will be juxtaposed with Gottfried Böhm’s original drawings, which, as independent artworks, are an impressive expression of modern architectural visualisation.

Gottfried Böhm (born 1920) is one of the most significant and most versatile architects of the 20th century. With his buildings, among which there are many internationally acclaimed architectural icons, he defined modern ecclesiastical and civil architecture for more than half a century. Böhm’s buildings are characterised by their sculptural form and by their stringent and direct materiality. Concrete, glass and steel play a central role, as do the related new technologies and possibilities of implementation, which Böhm uses as a medium for his innovative and modern architectural style.

Among the many buildings Gottfried Böhm has created are twenty structures which are located in and near Cologne. With this huge oeuvre, he has made a significant and lasting contribution to architectural culture and urban planning in both Cologne and the region and has created style-defining structures in the cityscape with his distinct architecture.

Hélène Binet is a Swiss French photographer focusing on architectural photography. During the past few decades, she has collaborated with the most significant contemporary architects worldwide and photographed outstanding buildings of modern architectural history.

Take a look with us at the current exhibition at the MAKK. We look forward to welcoming you back to the MAKK soon. The duration of the exhibition has been extended until 28 March 2021.