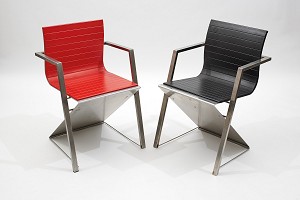 35 years after the group’s foundation, the Cologne Museum of Applied Arts will be showing the first monographic museum exhibition of the Cologne-based Pentagon Group (1985-1991), which was one of the protagonists of New German Design.

At the beginning of the 1980s, a young generation of German designers renounced the principle of ‘good form’, which, until then, had been a defining characteristic of German design. Inspired by the concepts of Memphis and Alchimia in Italy, German design, too, experienced a radical renewal. One of the protagonists was the Cologne-based collective, the Pentagon Group, founded in 1985 by Gerd Arens, Wolfgang Laubersheimer, Reinhard Müller, Ralph Sommer and Meyer Voggenreiter. Pentagon worked with steel and Perspex, combining these materials with stone, rubber or leather, but also using them for everyday objects, lending their design a postmodern kick. In 1987, the collective was part of documenta 8 and of the Sao Paulo biennial with its Café Casino project. Subsequently, the group also had exhibitions in, among other places, Milan, Rotterdam and Vienna.

The comprehensive exhibition at the MAKK will be designed by the Pentagon members. The works of the group’s members, almost all of which come from private collectors, will be presented in a large installation staged in the museum’s central exhibition hall. The pieces of furniture become performers, set against the backdrop of a video collage that reflects the 1980s and places the work into a cultural and historical context.

The Café Casino is also part of this installation: established for 100 days in 1987 in Kassel, in the rooms of a former nightclub, the café not only featured furniture that was especially designed for the purpose – for example the iconic d8 zigzag-shaped chairs – but also objects, which, via the Pentagon seal, had been re-branded: crockery from a German porcelain manufacturer or glasses by a German glass manufacturer, for example, were transformed into Pentagon crockery and Pentagon glasses. On the one hand, this deliberate change of authorship was a facetious provocation, but, on the other hand, it was also an expression of questioning traditional values. However, the all-encompassing design of the Café Casino did not stop at furnishings and utensils: the selection of food offered at the café and the respective menu were also developed by the collective. Part of the café, including the bar tables, which were destroyed on the closing night, will be recreated at the MAKK, based on the original designs and the café will be ‘revived’ in the context of special interventions.

Another part of the exhibition will be dedicated to graphic design, to sketches, drawings, stationery, catalogues and commercial graphics, such as posters or invitation cards. These documents from private collections will be presented here for the first time, providing an exciting insight into the group’s activities. The incubator and hub was the legendary Pentagon gallery, established in 1985 in Cologne which was originally conceived as a producers’ gallery, but also attracted attention with its exhibition programme: with objects situated at the interface of art and design, elective affinities were created between, for example, Möbel perdu, Siegfried Syniuga, Jasper Morrison, Stiletto, Hans-Peter Adamski or Andreas Brandolini – igniting discussions in Cologne and beyond. Additionally, the titles of the group’s own or other exhibitions often alluded to the political situation in the 1980s: Herbstmanöver, Wirtschaftskriege, Statussymbole, Griff in den Staub, Wieder Aktionismus have both alarming and humorous references.

The story of Pentagon and New German Design will be narrated in a 15-minute documentary, which has been especially produced for the MAKK exhibition. The former Pentagon members and a selection of friends, supporters and associates along the way (Volker Albus, Michael Erlhoff, Nils Holger Moormann, Heike Mühlhaus and Sabine Voggenreiter) contribute their views and memories in 11 interviews, which will be juxtaposed with current statements. Additionally, original videos will be shown, for example the one of the Pentagon intervention for the closing of the d8 café where some of the furniture was destroyed.

The Design Pentagon Group exhibition is sponsored by the Peter and Irene Ludwig Foundation and by the Overstolzen Society. 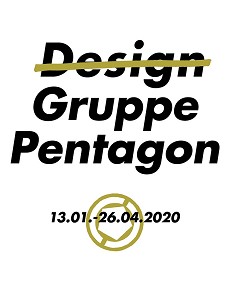