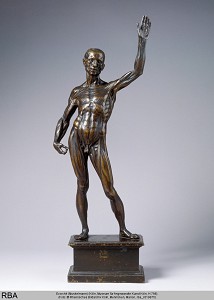 Anatomical Model of a Man (Écorché)

This bronze sculpture depicts a standing male anatomical figure with exposed musculature. The left arm is lifted with the hand extended; the right arm is slightly bent, pointing downwards with the hand cupped upwards. The legs are in contrapposto, resulting in an axial twist of the hips. This position allows the definition the muscle groups of the arms and legs, of the upper chest and of the hip in both stretched (left) and flexed (right) conditions. Since the 18th century, this kind of representation of an anatomically precise ‘muscle man’ without skin has been referred to by the French term écorché in both art history and medicine.

The earliest verified representations of artistic écorchés originated in the renaissance. When creating a representation of the naked human body, the Italian humanist, mathematician, art and architecture scholar, Leon Battista Alberti (1404–1472), recommended starting with the bones followed by the addition of the inner organs and muscles and ending with the skin. Many écorché drawings by Leonardo da Vinci (1452–1519) have been preserved, for example a shoulder study with downward-outstretched arm (1509–1510) in four positions.

Lodovico Cigoli was one of the most significant artists around 1600, known in particular for transporting Florentine painting from mannerism to the baroque style. His œuvre comprises more than 30 verified and dated works; approximately 45 paintings are known. Additionally, many drawings and texts have been preserved in Florence, including 15 plans for the design of the façade of the St. Peter’s Basilica in Rome, which are exemplary of his work as an architect. In comparison, there are only few sculptural works by Cigoli. The most significant one is his ‘muscle man’, a wax model and a bronze cast which can today be found in the Palazzo del Bargello in Florence. This work, particularly, had a great effect, which is substantiated by the 26 27 many casts that were created, one of which is the one shown here at the MAKK.

Lodovico Cigoli’s eventful life has been documented primarily by two biographers. The most important and detailed source is the introduction to Cigoli’s unpublished treatise on perspective, which was written by his nephew, Giovan Battista Cardi (life dates unknown), who had prepared both the treatise and the introduction for publication.

Born in the village of Cigoli in the Province of Pisa, the artist went to Florence when he was only nine years old, and, in 1572, became a student of the mannerist painter Alessandro Allori (1535–1607). After an illness had forced him to interrupt his training, he continued his education with Bernardo Buontalenti (1531–1608), who had also been a theatre machinist, and with Santi di Tito (1536–1603). In addition, he studied with the mathematician Ostilio Ricci, who taught at the court of Francesco I. de‘ Medici (1541–1587), where Cigoli met the polymath Galileo Galilei (1564–1642) who would become a close lifelong friend. In 1604, Cigoli followed a call to Rome to collaborate in the completion of the St. Peter’s Basilica. He stayed in Rome until his death in 1613. He was, however, still able to complete his most significant work in 1612, the frescos for the Santa Maria Maggiore church.

In the cupola of the Cappella Paolina at Santa Maria Maggiore, Cigoli depicted the Assumption of Mary in the midst of the apostles. Crowned with a halo and surrounded by angels, Mary is standing with her right foot on the sphere of the moon whose surface is extremely rugged. Furthermore, the lower side of the moon is obscured by shadow. In 1610, Galileo Galilei had discovered the rugged, ‘speckled’ surface of the moon during his telescopic observations and had relayed this information to Cigoli, who confirmed and documented his friend’s discoveries with his telescope – as was also the case with the sunspots discovered two years later.

From his childhood days, the search for truth, for the true essence of things, was a major concern for Lodovico Cigoli. In the 15th century, following Alberti’s demand that artists should study the construction of the human body – especially that which was ‘below the surface’ – this kind of study became a prerequisite in the 16th century, which is why artistic training also included anatomical dissection. Cigoli had been a member of the Accademia del Disegno since 1578 according to whose regulations students were obliged to participate in annual autopsies. Allori, Cigoli’s first teacher, even had his own anatomy theatre, in which the restless Cigoli constantly engaged in dissections – which, presumably, was also the reason for his early illness. In 1599, the renowned physician Théodore Mayerne (1573–1655) came to Florence in order to give lectures and carry out dissections. Cigoli not only became a friend, but, inspired by Mayerne, also turned to anatomy with a renewed passion. The écorché shown here also dates back to his creative period around 1600. The bronze sculpture does not depict a frail old man, but a rather delicately built young adult whose face, despite the missing skin, is turned towards the viewer with his head slightly tilted downwards and his mouth half open. Cigoli did not want to expose the human body: he wanted to show the perfection of creation. This was also the spirit in which Galilei described the magnificence of the human body, which “was formed of so many muscles, tendons, nerves, bones”. Cigoli, who was known for showing the same degree of virtuosity with the scalpel as with the paintbrush, created an accordingly precise écorché: from the direction of the muscle fibres to the depiction of the lymph node in the groin – incidentally, for the first time in art history.