Two Cologne-born Artists at the Bauhaus

To mark the Bauhaus centenary, the MAKK will be presenting the work of avant-garde ceramic artist Margarete Heymann-Loebenstein and of sculptress and stage designer Marianne Ahlfeld-Heymann. Their work will be shown in a dialogue with colour studies, paintings, drawings and sculptures by Johannes Itten, Oskar Schlemmer, Wassily Kandinsky and László Moholy-Nagy from the museum’s own collection.

With this exhibition, the MAKK retraces the work of two female artists born in Cologne to Jewish families: the cousins Margarete (1899-1990) and Marianne (1905-2003) Heymann. The exhibition title relates to the fact that 14 Cologne-born people spent some time at the Bauhaus. Up until now, with a few exceptions, their artistic legacies have not been generally known to the public.

In 1920, Margarete Heymann was admitted to Johannes Itten’s preliminary course at the Bauhaus. In 1921, she went to train at the ceramic workshop Dornburg under master of craft Max Krehan and master of form Gerhard Marcks. She continued to attend courses in Weimar taught by Georg Muche, Paul Klee and Gertrud Grunow. Although Heymann left the Bauhaus in the autumn of 1921, her time there would have a lasting effect on her work. This is particularly evident in both the avant-garde and reduced forms of her consumer ceramics and in her famous disc-handle services, most notably in the tea service, which is designed completely using basic geometric shapes. Its ornamentation also lends itself to comparison with compositions by Kandinsky or Moholy-Nagy. In 1923, together with her husband Gustav Loebenstein, Margarete Heymann-Loebenstein founded the Haël Workshops for artistic ceramics in Marwitz, near Berlin. The workshops’ creative programme would soon be met with great international demand. The business was closed at the end of 1933 and aryanised in 1934. Margarete first fled to Denmark, then emigrated to the UK in 1936.

Marianne Heymann first attended the School of Arts and Crafts in Cologne and, from 1923 onwards, the sculpture workshop at the Bauhaus, but she left in 1925 because the class was dropped after the Bauhaus‘s move from Weimar to Dessau. She attended Walter Gropius’s sculpture and stage design classes, but she was particularly impressed by Paul Klee’s artistic teachings. After her time at the Bauhaus, she created hand puppets and marionettes for independent productions, before working as a stage designer, both for the Mannheim National Theatre and the Cologne Opera. She created many designs for imaginative sets, costumes and masks, for example for Jacques Offenbach’s operetta La Périchole. The influence of Schlemmer’s stage art is particularly evident in her costume designs: towering headpieces, featuring concentric rings, trapezoid robes, quilted and padded borders and clear colour palettes. Marianne Heymann was also denounced to the Nazis. She fled to Paris via Ascona and emigrated to Israel in 1949. 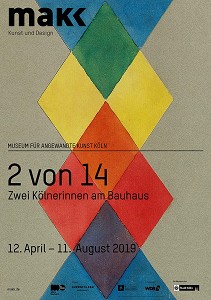 Please register your group by email