The Origin and Topicality of Flexible Lighting

Coinciding with imm cologne and PASSAGEN 2019, the Cologne Museum of Applied Arts will be opening 100 Years of Adjustable Light – The Origin and Topicality of Flexible Lighting. The exhibition retraces both the 100-year history and the inventive and aesthetic dimensions of adjustable light. Starting with the innovations developed by lamp manufacturer Midgard at the beginning of the 20th century – whose founder Curt Fischer is considered the ‘inventor of adjustable light’ – the exhibition will showcase a range of selected examples by various manufacturers and designers up to the present.

1919 was a year of upheaval, of social and political renewal. One hundred years ago, electricity and electrical lighting arrived at factories and homes alike. In the same year, the engineer Curt Fischer from Thuringia had his ‘adjustable universal wall arm’ patented. Born from the necessity of providing suitable lighting for the workstations in his own factory, he developed ‘special illumination devices’, lamps with a large degree of flexibility and for multiple applications. These lamps have now been produced for 100 years and their distinctive aesthetics integrate perfectly into various environments, at work, in the office or at home. The 1920s design avant-garde at the Bauhaus and elsewhere discovered Fischer’s lighting devices and applied them according to their needs. Designers like Marianne Brandt, Marcel Breuer, Walter Gropius and Laszlo Moholy-Nagy, and also Lyonel Feininger, Egon Eiermann, Sep Ruf and Jan Tschichold were fascinated by the lamps’ glare-free and adjustable light. Architects, photographers, typographers and painters used them in their studios and designed interiors, in which ‘the Midgard’, as a modern lighting appliance, was a firm favourite. Featuring original lamps, patents, letters and drawings, as well as short videos, the exhibition recounts the evolution of the lamps from the Thuringian company, alongside contemporary and current developments from various designers and manufacturers. 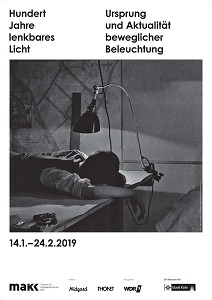